On the basis of the first version of the bag “Bodyguard 9-XL”, which we described earlier, Security company “Deviatka” has designed an improved version, taking into account all the requests and wishes of the previous model owners. For the convenience of bearing, the belt was changed and shoulder pads area was enlarged, as well as the inside pocket on the left side of the belt was broadened. And as a result, mobile phone or smart phone with dimensions similar to iPhone can be placed in it. The scheme of closing section for weapon storage was also changed. In new version of tactical bag zipper is used instead of buttons. The main innovation of the new model is the ability to use replacement valves. Now you can quickly and easily change the view of the front part of the bag, and adapt it to any mode of dress. This fact allows realizing the possibility of masking tactical bag and also makes it possible to carry in a pocket of the mounting valve accessories such as a web tablet Apple iPad. Designs of removable valves are made of vinyl, leather or hard denim, and drawings are applied with special paint, or by laser engraving.

The design of the tactical bag involves placing the pistol behind the main bag unit with individual placement of inside holster, and a system of immediate opening allows you to remove weapons quickly and quietly. Bag “Bodyguard 9-XL ” allows to carry out hidden videotaping, as with conventional video cameras so with professional special equipment. For this purpose there are special seats for fixing video – photographic technique with the possibility of hidden video through a special “window”. The mouth of the main compartment of renewed tactical bag “Bodyguard 9-XL” is equipped with a cord to tie that allows you to fix additional inside contents (notebook, camera or camcorder, iPad, or other similar device). END_OF_DOCUMENT_TOKEN_TO_BE_REPLACED

It is well known that short-term or frequently repeated exposure to loud sound can cause hearing loss, and this process is irreversible. During the shooting of firearms shooter’s ears are always at risk, especially when shooting indoors. Protect the ears to help special passive or active earphones, earplugs, and some needle is inserted into the ears of even the spent cartridges. It should be understood that the use of a hearing protection earplugs or spent cartridges not only comfortable, but can be dangerous to health. Eardrums from exposure to loud sound of course, they will protect, but to earn over time, the ear mycosis can be quite fast. Earplugs reduce the noise level of about 20 dB, but they do not protect the bones of the skull around the ear, which are also conductors of sound. Passive headsets shooting well protect the organs of hearing, but they prevent the perception of ambient sounds and talk in the headphones or listen to the instructor team is almost impossible. 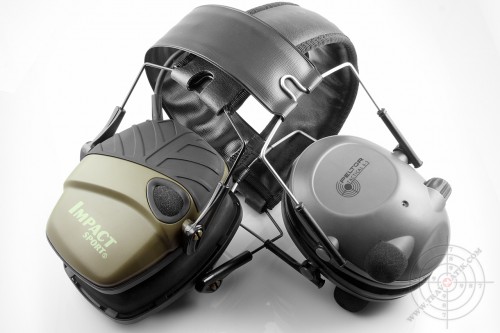 All these shortcomings are deprived of headphones for active shooting. Today’s active headset with one hand, provide protection from noise over 82 dB, on the other hand increase the ambient sounds by an average of 19-22 dB. The design allows the active headphones with volume control to strengthen the specific noises and sounds, allowing you to communicate not only comfortable, but also clearly hear the sounds of poorly distinguishable, which may be useful as a hunting, and in carrying out tactical exercises. Play is in stereo, so you can correctly identify the direction from which came the sound. Digital models of headphones block sound transmission only when the shot sounded. END_OF_DOCUMENT_TOKEN_TO_BE_REPLACED